skip to main | skip to sidebar

Caught Off Guard: Get Help's "The End of the New Country" 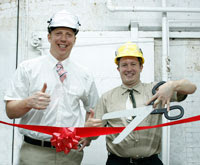 By: Daniel
Every once in a while -- a very long while -- I'm caught off guard by how good an album is. As is the case with The End of the New Country by Boston's Get Help. I had never heard of the band, its record label, or any of its members. The record wasn't sent to WASU by one of the many promoters who supply us with CDs. A one-sheet listing the tracks, giving a little background on the band, and imprinted with a, dare I say, unflattering picture of the two primary members was all that accompanied the CD. What cause did I have to expect great things from Get Help? How was I supposed to know The End of the New Country would be chocked full of beautifully dark post-punk goodness that brings to mind such masterful bands as Joy Division, The Pixies, and especially R.E.M.?
I would take the time to write a detailed description of the album, but why do what NPR has already done so well?
A self-proclaimed "supergroup of unknown musicians," Get Help makes gloomy but thoughtful 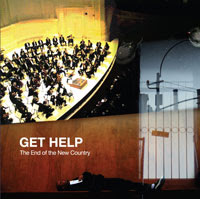 guitar-rock that would fit comfortably in the post-punk era of the late '70s and early '80s. Get Help's two primary members, Tony Skalicky and Mike Ingenthron, were in elementary school when bands like Joy Division were making music. But on their new CD, The End of the New Country, the duo cribs from post-punk with enough honesty and talent to keep from sounding like a cheap knock-off.

Skalicky and Ingenthron, who write and record in New York, take turns on lead vocals. Skalicky unabashedly channels Joy Division's Ian Curtis (or Interpol's Paul Banks), and for some listeners, that might be too much of a turnoff to get through the whole album. But Skalicky's time at the mic fuels the album's most compelling and memorable moments.

The End of the New Country opens on a somber note with "Traveler's Shave Kit." Plaintive guitar strums, gentle rhythms, a little slide guitar and mellotron set an appropriate tone for an album that scarcely cracks a smile over the course of 15 tracks.

The album's title cut, like much of the CD, is full of resignation, as Skalicky sings about a world on the brink of collapse, with mobbed streets lined by burning buildings. "I think we've reached the end of the new country," he sings. "And I think we know the rest of its history." It's grim, to be sure.

But it could also signal a new beginning: By the end of the album, with the dramatic squalls of feedback on the closer "Growing Circles," the band seems to say that everything is going to be all right. "I am searching in growing circles," Skalicky sings. "And I will find you, I am certain."

Despite its darkness, The End of the New Country isn't a downer, though it's undeniably brooding and introspective. But there's enough inspired beauty in the lyrics — and consistently impressive guitar work — to make the music uplifting at times.

When not working as Get Help, Skalicky is the singer and guitarist for the Boston-based group The Beatings, while Ingenthron is in the New York group Strikes Again. The two collaborated on the songs for The End of the New Country over the Internet, with help from Rob Machold, William Scales, Daniel Parlin, Dennis Grabowski and Gene DiAvolio.